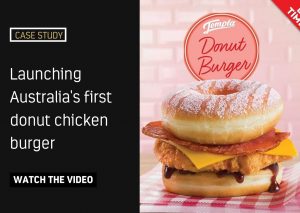 It was to be available for a limited time only and a PR campaign was needed to start conversation around the burger and drive people in store to try it.

In two weeks, we achieved 30 stories, with an audience reach of more than 882,000 people across Western Australia and Queensland. The story even attracted international attention from London’s Daily Mail. The coverage was worth more than $115,000.

We conducted a two-part campaign to create two different news hits. Here’s how we approached it.

We wanted to create a news opportunity in the lead up to the product launch to create hype around it.

Chicken Treat informed us they were going to hire two taste testers to help put the finishing touches on the product before it appeared in stores. It was the perfect opportunity to create a news story about “Western Australia’s greatest job”.

The job ad went live and hours later, our media release was sent. It attracted coverage far and wide, starting with a minute and a half on WA’s leading news organisation, Channel 7 News at both 4pm and 6pm and gained extensive online attention across Western Australia.

Social media had a blast with it and the coverage attracted almost a thousand job applications in just three days. Clearly there was interest in this new product, even though it was clouded in secrecy. We hadn’t revealed what the tasters were testing, just stating it was a new burger set to launch in a fortnight.

On the same day the donut burger launched to market, we created a media event. Journalists were invited to a Chicken Treat restaurant where they could interview CEO Mimma Battista and speak to the two successful applicants of the “Greatest Job in WA”. They would also have an opportunity to get photographs and vision of the donut burger and try it for themselves.

We also organised to shoot a Video News Release so we could send the story to regional areas across WA and in Queensland where Chicken Treat restaurants are located. It led to coverage across both States, including these two TV stories which aired in Bunbury and Rockhampton.

As well as localised stories, journalists love controversy and the donut burger happened to launch the same day the Australian Medical Association held a media conference about obesity. The burger prompted some lively comment from the head of the AMA which just led to more conversation and further coverage across news media.

The story featured in all three metro commercial television networks and regional TV news, had a near-full page in the West Australian newspaper with a great photo, and numerous online articles which ran nationally and internationally. We also arranged for the burgers to be delivered to talkback radio station 6PR so the Drive presenter and producers could try it on air.

Social media hailed the launch of the burger “marketing genius” and the extensive media coverage ensured people knew about the Donut burger (which quickly sold out as a result). It also created long-lasting brand recognition for Chicken Treat and solidified its position as a “jester brand”, one that has fun and creates quirky products that people love to talk about.