PRISCILLA QUEEN OF THE DESERT: THE MUSICAL OPENS FOR THE FIRST TIME IN QUEENSLAND

PRISCILLA QUEEN OF THE DESERT: THE MUSICAL OPENS FOR THE FIRST TIME IN QUEENSLAND

Priscilla Queen of the Desert: The Musical has sashayed its way to the Queensland Performing Arts Centre for a six-week season.

The musical features 500 dazzling costumes, 200 headdresses and countless dance-floor hits including “It’s Raining Men”, “I Will Survive” and “Finally”.

Based on the Oscar-winning Australian film, Priscilla Queen of the Desert is the story of three friends who travel from Sydney to Alice Springs on a battered bus, to put on a show of a lifetime.

Tony and Olivier Award nominee Tony Sheldon will reprise the role of “Bernadette” and said he was taken aback by the audience’s reaction to the show.

“From the opening chords of “I Love the Nightlife” right through to the end, pandemonium breaks out – they just love the show,” he said.

Director Simon Phillips said the actors don’t often get to sing and talk in their own voices.

“It’s refreshing to see an Australian show with Australian creatives,” he said.

In the role of “Bob the mechanic” is treasured Australian actor and Home and Away star Ray Meagher, who said the pink bus took him from Sydney to London to Auckland and this year to Brisbane.

“I never in my wildest dreams thought a bloke from the Queensland bush who can’t sing or dance would be allowed anywhere near a musical,” he said.

“The costumes and the music are absolutely fantastic, not to mention the performances.

“If you can do a run of the show and finish without any sequins on you somewhere, it’s a miracle.”

One of the major stars of the musical is the old campervan, which has a bus driver who controls it from afar.

“You know, it’s really the fourth star of the show,” Mr Philipps said.

Adoni Media had the pleasure of filming among the sequins and sparkle to create a Video News Release for QPAC, ahead of Priscilla’s opening night on Friday 26 October.

WHAT IS PUBLIC RELATIONS? 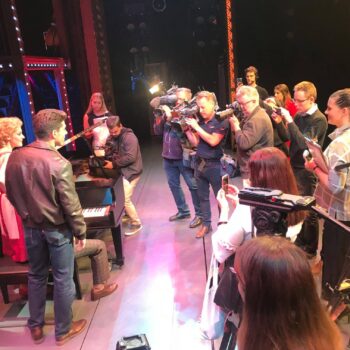 From our interns: Lucy’s experience 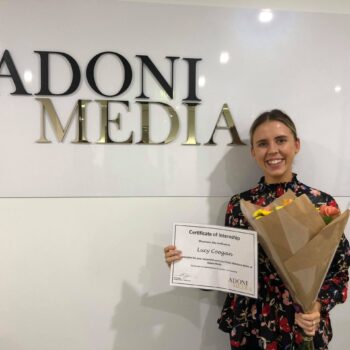