Joyous Broadway hit Beautiful: The Carole King Musical has opened at the Brisbane Lyric Theatre, QPAC, with a talented cast of 24 performers, including six Queenslanders.

“It’s amazing being back in Brisbane, I’ve been away for a year with my castmates and to finally come home with the show that we love so much is amazing,” Brisbane local, Naomi Price said.

Multi-award winning Esther Hannaford plays the role of Carole King and her “sublime performance” (Daily Telegraph) has been praised by audiences, critics and castmates.

“I personally love watching Esther sing Natural Woman every night. It’s just flawless night after night and it never fails to get you a little bit choked up,” Ms Price said.

The song list is jam-packed with timeless hits from the 60s and 70s including (You Make Me Feel Like) A Natural Woman, I Feel the Earth Move, You’ve Lost That Lovin’ Feeling, You’ve Got a Friend, Will You Love Me Tomorrow, It’s Too Late, Locomotion, On Broadway and We Gotta Get Out of This Place.

“It’s really amazing to see audiences recognise all the songs they know and sing along and dance,” Music Director Daniel Edmonds said.

“We have a 12-piece live band playing every night and a lot of Brisbane locals supporting our cast on stage.

“We certainly feel a great responsibility to bring this music to life because it is the music that people grew up with.”

Adoni Media had the pleasure of filming a Video News Release at QPAC of Beautiful which was written by the Oscar®, Emmy®, BAFTA and Tony® Award-nominated Douglas McGrath, directed by Marc Bruni and choreographed by Josh Prince.

Beautiful opens at the Brisbane Lyric Theatre on Friday 13 July.

HOW TO CONDUCT AN INTERVIEW 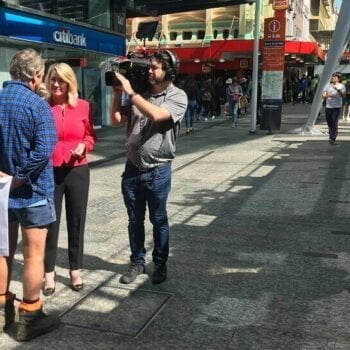 HOW TO WRITE A PROFESSIONAL BIO