Adoni Media – A member of the Public Relations Institute of Australia

In 2022, Adoni Media will mark its 10th year of providing public relations, media training, video production, and crisis management advice and support to corporates, business leaders, and charities across Australia.

As a leading PR agency, Adoni is a member of the Public Relations Institute of Australia (PRIA) and so is Founder and Managing Director, Leisa Goddard.

With more than 30 years of media and public relations experience, Ms Goddard said Adoni, like PRIA, was committed to maintaining the highest standards of ethical practice.

“Clients trust our Adoni team to prepare, promote and protect their brand and reputation and they know honesty, integrity and transparency is at the core of everything we do,” Ms Goddard said.

Adoni is an award-winning PR agency that has been ranked by Clutch as one of Australia’s top B2B service providers for the past two years.

Adoni has also received industry awards and been a finalist in Mumbrella’s CommsCon Awards for Best Government Relations campaign for Your Health Your Choice.

Ms Goddard, herself a Logie finalist for news reporting on the Afghanistan War, established Adoni after decades in Australian television.

Adoni services ASX-listed and franchise companies, SMEs, and charities including The Salvation Army.

What our PR clients say

Simon Gregory of The Salvation Army said: “Adoni were able to help us grow our media engagement via their extensive contacts throughout the Queensland media landscape and we experienced growth in the number of opportunities we received to share about our Christmas and Red Shield Appeal campaigns”.

“Our National Media team was extremely happy with the results we received,” he said.

Leisa and her team is professional, connected, prepared to get to know you and your business, and work hard to open up opportunities to tell your story.”

Help to tell your story

To find out more about how you can partner with Adoni Media make contact here. 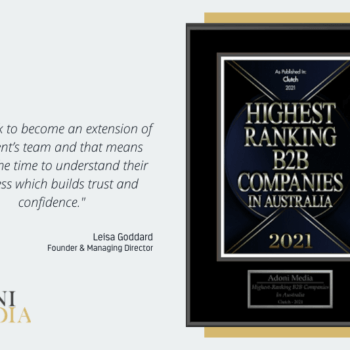